In 1773, the people of Boston were quite fond of tea, as a matter of fact, they drank so much of it, they could no longer afford the tax imposed on it by the British parliament, decided to no longer pay them, dumped 342 chests of tea into the river, and consequently founded the United States of America, a country famous for Starbucks coffee (a company famous for paying no taxes at all). Tea leads directly to financial independence, one could deduce. Of course, financial independence is just college talk for liberty. Liberty, I say! So today, I decided to no longer pay taxes, either, and had a little tea party myself. I shall inform the treasury after my next cup. 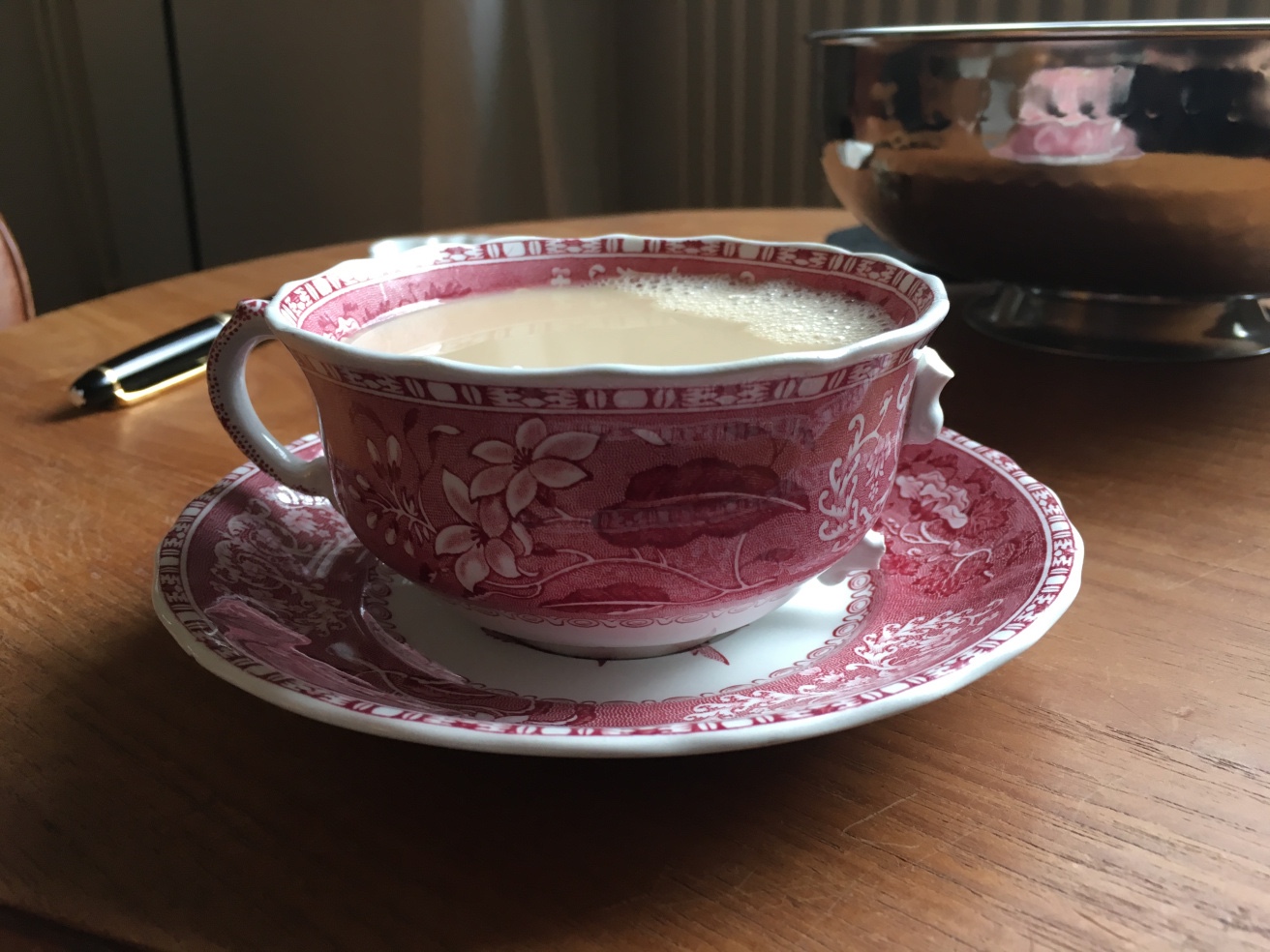 I am a heavy drinker; of tea, that is. My afternoons are consumed by tea breaks, it starts with bringing water to the boil, counting the spoons, deciding whether it’s going to be tea from Assam or Darjeeling, Kusmi or Fortnum & Mason, pure or with some fancy aroma, Earl Grey or Queen Mary, with or without milk, there a thousands of questions to be answered with a every new brew. And then there’s the question of the cup, elegant or convenient, convenient meaning big enough not having to pour a new cup after every sip. My favourite convenient cup is actually a bouillon cup, a bouillon cup that lost one of its handles many a year ago, turning itself into a tea cup (I’m to blame for that—coincidence? I think not), it’s big enough for a bouillon spoon, Carson, the butler at Downton Abbey told us about these somewhat démodé items of cutlery, but more importantly, it’s big enough for a heavy drinker’s mouthfuls. I love that cup. And I think I’m having another pot of that organic grown Assam now. Milk in first.

I’ve been feverish and cranky for days now, I’ve been doing nothing but coughing and sneezing and complaining about it. You see, I am a victim of the worst flu ever. I had to spend New Year’s Eve in bed, and when I finally woke up from the fireworks, which were great as I was later told, the fireworks were over. Then I slept some more. And then, my mother brought me the best tea ever, some strong Assam from Mangalam with milk, accompanied by the best sandwiches ever, basically toast, cream cheese and some herbs. I can’t say that I feel any better, but I’m certainly a lot less cranky. 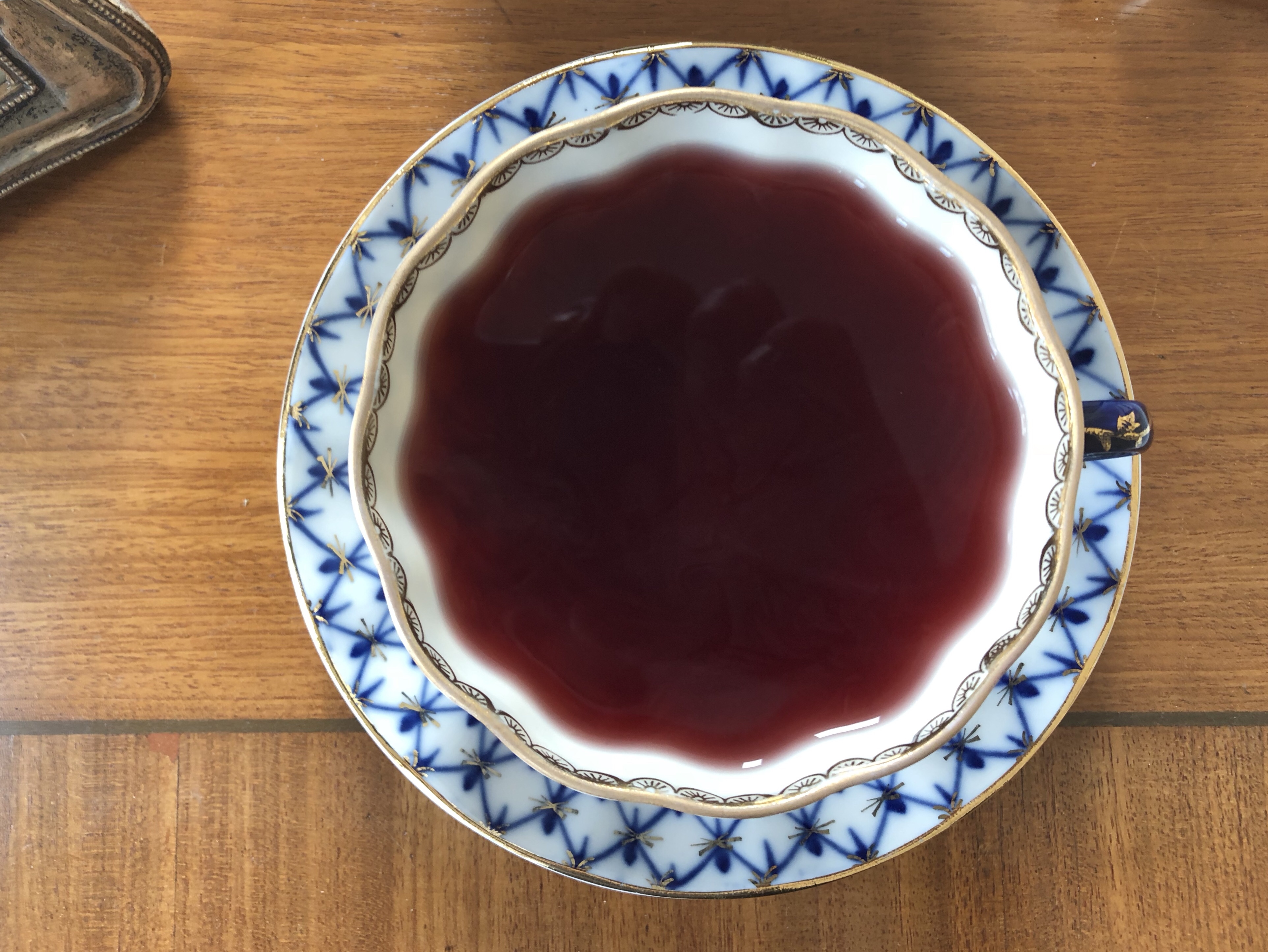 Red is the most beautiful colour. There are red roses to enjoy in your garden or to give to your sweetheart (yes, I’m a romantic), there are redheads to fall in love with (just like Charlie Brown did, hopefully much more succesful than he, but that’s another story), there’s red wine (the best beverage in the world), and then there is rose hip tea, the reddest (or is it “the most red”?) of teas. Not only is its colour a nice contrast to any blue and white china, much nicer than the depressing brown of a strong Assam for example, it’s also very healthy and you can have it after dinner without risking counting endless series of sheep jumping over a fence for the rest of the night and then having to answer to your colleagues why you look so very tired in the morning. So, in order to stay well rested and healthy, I order rose hip tea for everyone!

Just a short note in between articles:

After the shock of being strangled to death by my Balmain jeans—oh, what a shock that was—I decided to go on a diet. And a very strict diet, too. No more cake. No more gummy bears. No more anything. Not even organic banana bread. With tea, I’ll just have a good book now and that’s it. At least, until I fit into my clothes again. I think, I’ll have to skip Christmas this year… 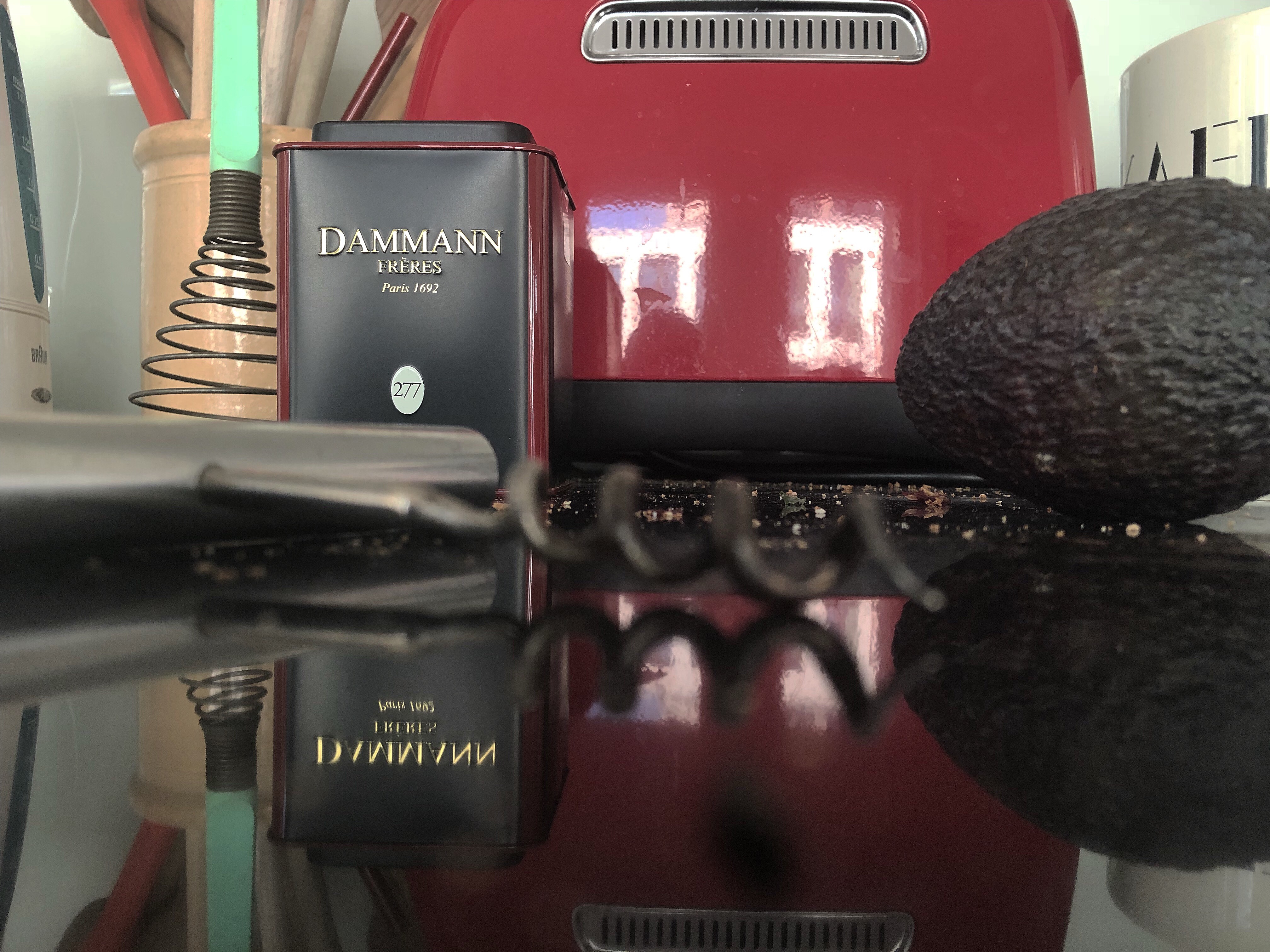 There’s a photographic error in this photo, the tea box should say Nuit à Versailles, too, not only 277, I mean what kind of information is that anyway, 277, just a stupid number, not even a nice one, but that damn Stelton cork-screw covers that tea’s much more evoking name of a night in Versailles. It’s a very tasty green tea, aromes of peaches, violets, kiwis, orange blossoms, and other yummy stuff that is to transport us to this magical place in France. Actually, just as it happens, I’ve never been to Versailles, however near to Paris, not once, so I’ve no idea whether there are any peach trees and violets in the palace’s gardens or not, kiwis are from New Zealand anyway, so I don’t really trust them, these fancy Dammann brothers. They just tell you n’importe quoi. Versailles, however, has a very culinary sound to me, my parents often visit, but rather the weekly market in the old town of Versailles than the palace itself, my mother always brings home artichokes, organic ones, of course, over the years it has become kind of a family thing to have our artichokes from Versailles, so whenever I see or eat an artichoke, I don’t think of the South of France where they grow but of Versailles, and I’m kind of disappointed that there aren’t any in this blend—but on the other hand, who wants a tea tasting and smelling of artichokes?

We had a guest who considers herself international. In fact, she’s got two passports, did her baccalauréat in Paris and over the years, she’s spent more time in California than some Hollywood actors. Much more. As a consequence, she constantly speaks four languages, sometimes all of them together, language barriers obviously are not hers to ever cope with, and so we happily adapted: over tea and under the walnut tree, we played Scrabble in three languages. Strangely enough, the extension of our vocabulary didn’t make it easier at all. So I layed out “Dieu” to get some help from above…

Some time ago, in 2015 to be precise, when photos on Instagram were all square, I mistook myself for a food stylist and arranged everything I ate and drank in a fancy manner—a manner Marella Agnelli played a big part in, or the book on her I had just bought the same year at a Zurich book shop. I arranged müesli, tea or some cake from Sprüngli’s on some fine china, placed it on dear Marella, took enough shots to choose a best one from, and posted it on Instagram—not very successfully though, the New York Times food section never called, 23 likes just don’t turn you into an influencer, I guess. Anyway, I would have forgotten all about it, if these very pictures hadn’t attracted somebody’s attention again just now, today, after all these years, after all these billions and billions of photos we see on Instagram—it must be a sign. And so I give you the 2015 Marella Agnelli Food Shoot. 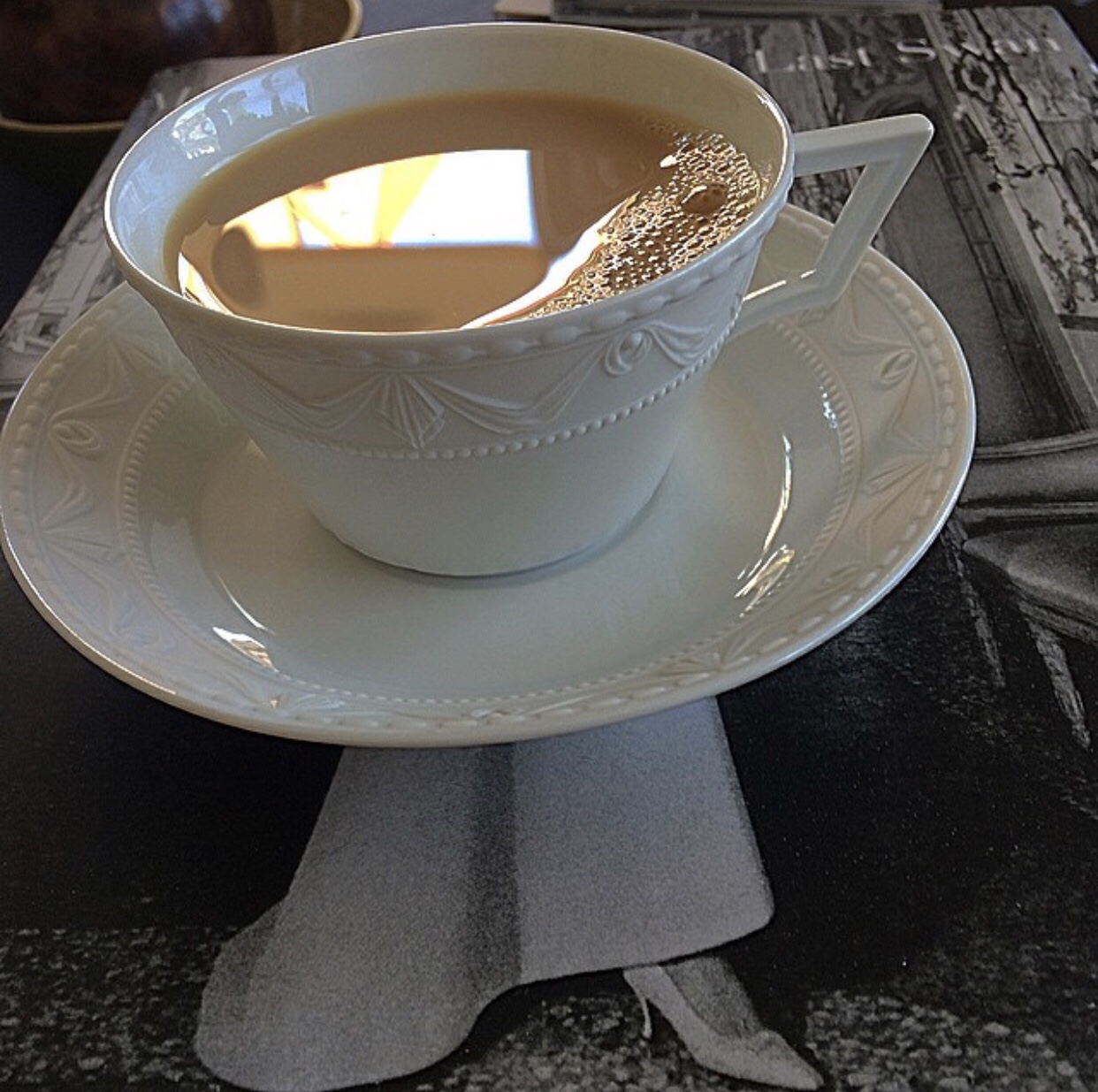 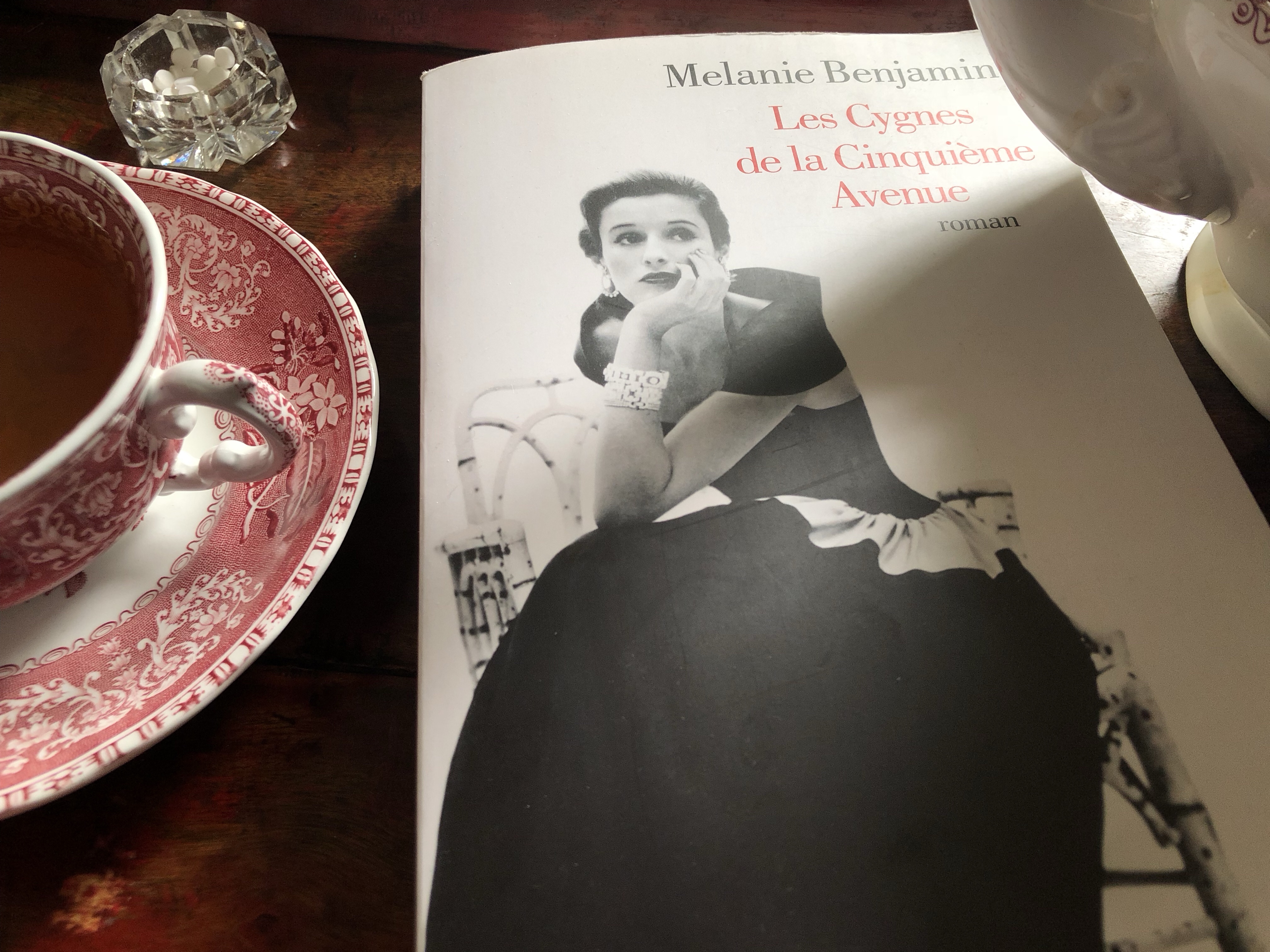 Some weeks ago, I posted a photo of Babe Paley on Instagram and one of my followers, a great Parisian lady named Marie, suggested a novel on that famous style icon in her comment, she gave me the title of a French book about her and the other swans from 5th Avenue, the very book you see on the photo. I was intrigued instantly and replied that I’ll read it asap, but truth be told I forgot all about it very soon, mainly because one is totally overexposed to information these days, but mostly because my list of books to read is already overextended as it is, ironically including the book this book’s based on, Truman Capote’s Answered Prayers, which I started some weeks ago and then forgot all about it, anyway, this very afternoon I was looking for some leftover cigarettes, I keep storing half-emptied packs in a particular s.o.s-drawer for nicotine droughts when there’s no fresh pack left, I keep forgetting about buying those, too, and on that side table a book was lying, a book I don’t recall buying or ever having seen before, but its title was so familiar, looking at it, I found myself in one of those moments when you wonder if you’ve lost your mind, but it then occured to me that not only Marie had told me about that book but also Katja, a friend from real life, as a matter of fact she had given it to me when she last visited, she had just finished it and recommended it highly, I, however, had all forgotten about it. The moral of the story? There is none, just that forgetful people are people, too, and that coincidences happen to work in mysterious ways, C. G. Jung had some theories about it, I must look them up one day, I forgot the details, but first things first, it’s tea and swans for now.

It’s hot, the air’s humid, you’re desperately looking for some shade because you don’t care for sunstrokes, and even if the sun weren’t about to addle your brain, your book’s white pages reflect the sunlight so damn straight into your eyes you might well end up blind, so you carry one of the benches, thank God, teak’s so light a wood, into some shrubbery, followed by your tea table, yes, tea, I know it’s hot, but the hotter it gets, the less any cold drinks are advised, least of all iced ones, believe you me, your circulation goes berserk and you’ll overheat like a motor in an Abu Dhabi traffic jam, if you had any relatives that served in the colonies, you’d know, and by the way, tea is from India not from Norway, the Indians should know what they are doing, shouldn’t they, but I digress, anyway, once in the shade, I started to enjoy myself, finally I was able to read without sunglasses; Evil under the sun, Agatha Christie’s lush novel, that I started some days ago while it was raining, finally was an approbiate choice. I wonder who’s done it…