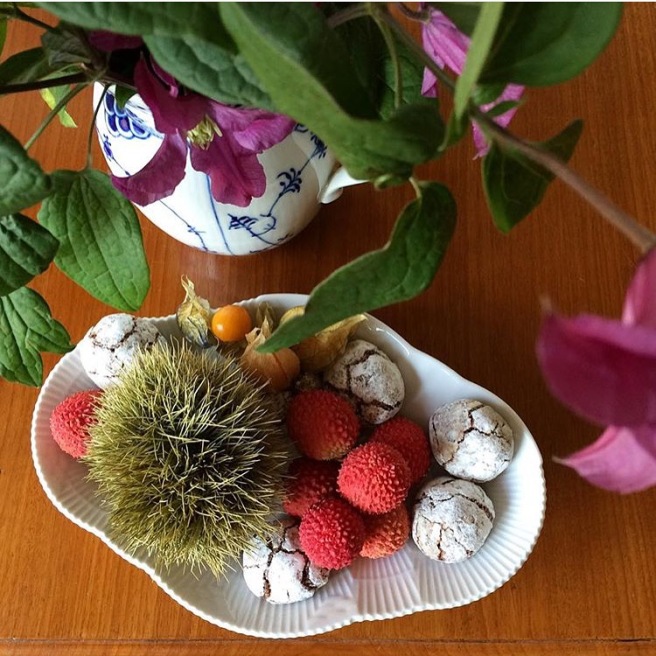 Some people have an inner child that they allow to, well, come out every once in a while and play, just to make sure they stay human, these guys are to be congratulated, for their wisdom, humanity and charm, I, however, whose inner child has never been locked up, whose emotional intelligence might be the one of Methuselah but whose behaviour is rather Calvinistic, and I’m referring to Calvin from Calvin and Hobbes here, not to that repressed guy from Geneva, what am I to do? You cannot let out what’s already out, can you? So I had to come up with an alternative: I let my inner interior designer out, and I pamper him well. I frolic through stores, buy bowls, vases and pitchers from Royal Copenhagen or Lalique, overpriced flowers from fancy stores, those way cheaper tulips from your grocer won’t do sometimes, fruit and cookies and other stuff that just has to be remotely decorative to give me a thrill and there I go, a new arrangement on my Regency table, I’m happy as a child, sorry, as an interior designer and ready to cope with life, business and deadlines.

I love insects. Dragonflies for example. Beautiful creatures. Fascinating even, some kind of chinoiserie helicopters in turbulence, caused by tropical summer heat, with a pilot who has had one too many whisky sours, until they’re suddenly disappearing in your garden’s Bermuda triangle while you’re having tea. Moths, however, I disapprove of, I despise them from the bottom of my heart. I’ve killed generations of moths over the years, or at least, I’ve made their lives miserable with moth paper, vast amounts of moth paper, placed everywhere, in my bedroom’s wardrobe, in the other wardrobe in the hall, in every fucking drawer, between pullovers, next to pullovers, on top of pullovers, layers everywhere, hysterical layers of moth paper, but these beasts are smarter than I thought. They discovered that one loophole in my meticulous precautions: my Hermès pillows. The other day, when I just wanted to rest my head after over-ordering at Mr Porter’s, nothing of importance actually, just underwear and socks, I discovered the holes they’ve left behind. Not even tiny ones, no, very gourmand ones. They had quite an appetite. I am still under shock. Who would think of moths attacking Avalon?