One Sunday, I was waiting for my friend Julie at Zehlendorf station in Berlin, you see, I don’t have a driver’s license, people have to pick me up from public transportation, anyway, I had been waiting for quite some time and started to feel a bit worried, ironically, I’m always late, but this time, I had been in time, way in time, actually, I was seven days early, an entire week, I was not being stood up, I just had mixed up Sundays. So, instead of catching up with a friend over some homemade delicacies, I had plenty of time on my hands, all to myself. Now, what could one do with that much time? Museum? On a Sunday? Rather not. I hate having people in the way when contemplating Cézanne’s apples and pears. So, as I was already standing in front of a station, I decided to take the next S-Bahn, opposite direction, of course, just to find out where it would take me. Well, it took me to Wannsee, Berlin’s biggest lake, and to a stunning old lady on a pedestal, erect at a time when some Wilhelm was Kaiser, and as I looked her over closely, I realized, she had lost all of her fingers, I couldn’t tell why, but she’s hiding it well, she’s maintaining her lofty position, in perfect poise, unabashed, unflinching, stout-heartedly, she keeps overlooking the lake as if nothing had happened, no kingdom, no empire, no republic fallen, no wars, no bombs, no battles lost, she’s embracing life at it is, and whatever the future brings. Inspiring lady. Meeting her was worth being stood up by the wrong Sunday. 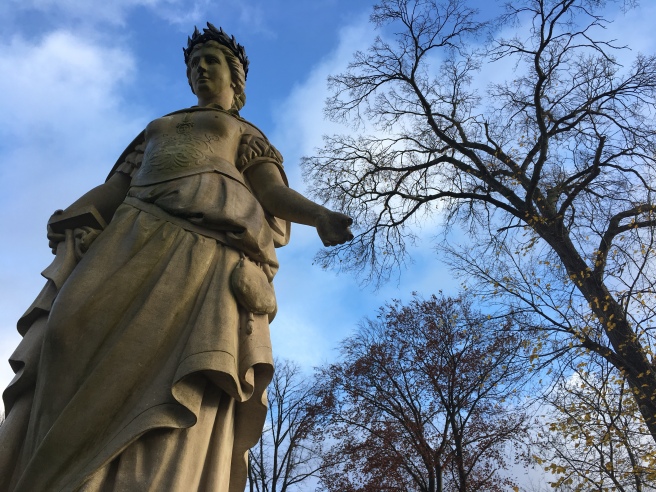